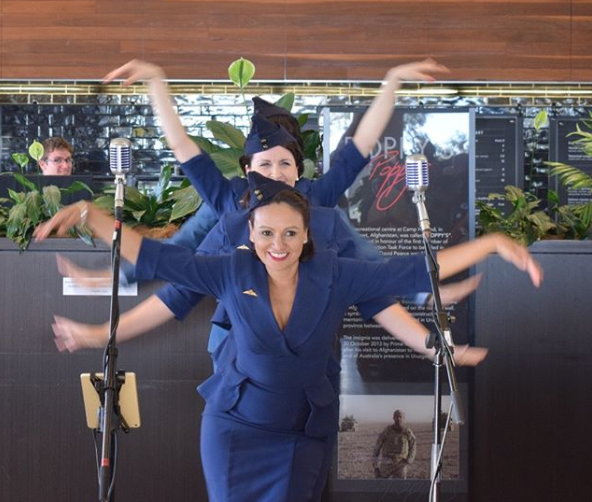 Aviation is a fascinating subject that captures a broad range of interests: from heritage and history, technical innovations, establishment of communities across vast distances, influence on concepts of modernity and design, and its critical role in war, to its environmental and social impacts, and, especially now, the fragility and future of the industry. Such topics are explored by heritage professionals, historians, archaeologists, anthropologists and other academics, as well as many devoted aviation enthusiasts. In 2019, between 14th-17th November at the Heritage of the Air conference this mixed group of delegates gathered together to explore these ideas through workshops, paper sessions, keynote speakers, tours and networking events. From outer space, air space, airports and airfields, to underwater aircraft wrecks and personal or family memories, the conference program was packed with diverse content. Special highlights included the opening reception performance by Company B, the arrival of the ‘flight crew’ to introduce the Plane Stories session, the distribution of a specially commissioned in-flight magaZINE ‘HOT AZ’ with complimentary sick bag, spectacular conference party with flash mob of swing dancers and DJ Sista Feminista, and final tours delivered by Canberra Modern and the Australian War Memorial Aviation Collection. Some of the impressions and insights of conference delegates were captured by our Heritage of the Air student intern team, ably led by University of Canberra Master of Arts student Sharpay Wu, who produced this fabulous short video:

The Heritage of the Air team are now reflecting on the rich insights that emerged from the conference to produce a range of publications based on papers presented at the conference as well as other research conducted over 2018 and 2019. Watch this space to see further updates on our blog and website!

And #CompanyB have started to arrive in Canberra folks – we’re ready to ‘Straighten Up and Fly Right’ as we sing some sweet aviation tunes at the @air_heritage conference tomorrow night!!#HoTA2019 #companyb #compabybvocale #1940s #1950s #aviationtunes #aviationcultures pic.twitter.com/VkrliFPNHa

What a way to open a conference session! My legendary supervisors Annie Clarke and @history2wheeler together with Steve Brown, Sally Brockwell, Ursula Frederick and Jane Ferguson preparing the audience for intellectual takeoff! #hota2019 #aviationcultures @air_heritage pic.twitter.com/4qBbyrlWdk

What an inspired idea to include artists in residence at #HOTA2019 I loved this zine which satirises what we expect from airline ephemera, lovingly packaged in an air sickness bag. Well done Fred and Flo! @air_heritage #aviationcultures pic.twitter.com/gUJYr0yQnk

Dr Pru Black asks hard questions about where we are & where we’re going with the viability of flight, and that we aren’t where we were in the golden age – another loss of Sept11.

Great session ‘WWII Ops’ brought together by @kristenauthor, fascinating how incredibly complimentary & overlapping these individual stories into a remarkably cohesive insight. What the whole conference is all about in a nutshell! #AviationCultures #HotA2019 @air_heritage pic.twitter.com/CxpzhY5IrC

@UoYArchaeology alumnus! There are a few here at #HotA2019. This was a fabulous presentation by @theresearchjess – captivating story and creative use of object biographies. https://t.co/7LsAFKYzIE